I have very few Christmas cards left to make now, so when I saw that the new challenge at CD Sundays is "Sprinkle of snowflakes" I decided to make a tag instead, using this very pretty backing paper from the La Pashe CD "The Christmas Box"

A bit of layering, a few die cuts and a minor incident of Crop-a-dile Nipple (I'm sure you've all suffered from that) later and one quick and CAS tag was the result.

I've had no end of fun trying to get a photo of it on this gloomy morning - whatever lighting I used, it seemed to want to make the silver look gold, so I took the photo with several different white balance settings. I'm not really happy with any of them but this is the least bad! 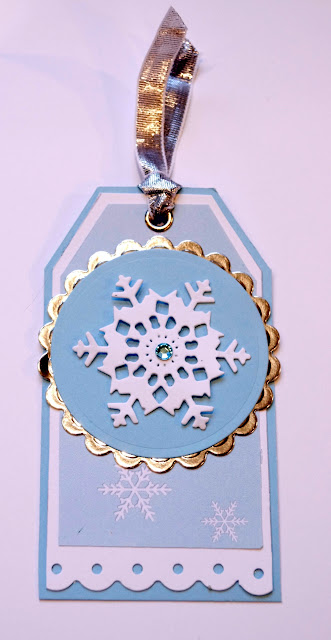 As well as CD Sundays I am sharing this with

EDIT: so Crop-a-Dile Nipple isn't a well known Thing? Maybe it's just me then - when using my Crop-a-Dile to add eyelets, I sometimes hold the handles too near to one of my boobs and when I squeeze hard to seal the eyelet down, the handles come closer together and squish anything in their way..... hard! It doesn't half bring tears to your eyes!
Posted by Jane Willis at 09:30

Really pretty tag, I love the design. Is the snowflake in the centre a pinch or a die? xx

Hi Jane. Lovely to see something different - and well done for having finished the cards. I am not there yet.
This time of the year is so bad for getting the right colours so we all understand. I have to admit to not knowing about Crop-a-dile Nipple. Is it something that can be discussed in public? (smiling)
Thank you for joining in.
Carol xx
Cd Sunday DT

Pretty tag, I love the snowflake.
Thank you for joining us at Allsorts this week.
AnyOldCraft (DT)

Thanks for your reply on my blog......glad you realised I meant a punch not a pinch! LOL!

So elegant it looks Jane

adorable tag, I love the snowflake.

Just perfect Jane! I did giggle about your 'industrial injury' and cottoned on right away - ouch! Tags are so popular in the Playground right now and this really is a beauty! Isn't that strange that the camera was so determined to change the silver to gold - mind you, at one point today around lunchtime it looked like dusk here!

I've added an explanation of the "ailment"!
jane

Thank you Jane. I haven't got one and I don't think I want one. I was talking to a friend whilst reading this and she knew what you meant.
Carol xx

Sounds just like a mamogram. Now I had gold changed to silver on a photo last week - How strange. Your tag looks beautiful Jane. Barbxx

Got the same problem Jane with the colour change. I love your tag and good to see something else besides cards. Thank you for joining I and how good are you finishing your Christmas cards. Wynn DT CD Sunday

Suffice to say that having Crop-a-dile nipple may have also impacted your ability to take photographs, Jane. Cry-key! I threw mine straight into the recycle bin on September 5, 2011 for that very thing. Not that I remember it like it was yesterday or anything. Cough. Your blue and silver tag is stunning! I love the dimension of a rhinestone in a snowflake in a circle in a scallop in a layer, layer, layer! Well done!! Hugs, Darnell

My word Jane, I will be very careful now using my crop-a-dial, sounds very painful, but in spite of all that you have made a lovely tag, i have to say i do love tags, thanks for joining us at CD Sunday.
sue-b xx

A very pretty tag. Thank you for the warning with the crop-a-dile. I shall be more careful in future.
Jocelyn x
CD Sunday DT

Pretty tag, love the snowflake, hope its getting better and not so painful
Margaret

This is a beautiful tag Jane, such pretty colours.
Thank you for joining us at CD Sunday for our 'Sprinkle of Snowflakes challenge - make sure you pop back and take a look at our 'Autumn Colours' challenge starting today.
Pauline
CD Sunday Guest Designer
x