NOTE - This is probably the last "real time" post you will see from me for a couple of weeks as I am going on holiday. I have quite a few posts scheduled to appear while I'm away (if Blogger behaves itself) but I'll probably not have much chance to visit or comment on any blogs while I'm away, it rather depends on how good the hotel's wifi is. I'm just hoping I'll be well enough to make the journey - I've spent the last couple of days having a sorting-out blitz and seem to have put my back out, and today I can hardly move.

Many years ago I had a little dabble in Iris Folding. And by a little dabble, I mean I spent a small fortune on card blanks and pre-cut paper strips and then made two cards..... While looking for something else the other day, I stumbled across all the Stuff and decided to give it a second chance, and this snow globe blank seemed to be a good place to start since, just in case you hadn't noticed, Christmas Day is exactly one month away!

The reason I'd  lost interest after my first couple of cards when I'd tried it before was that the area around the edge of the aperture always seemed, well, rather dull. The folding and colours inside meant there was too much going on for it to be a CAS card, and yet it somehow always ended up looking unfinished. So I decided to add a bit of inking to add interest. First I gently inked with yellow around the globe part, to make it look as if it was sort of illuminated, and then (and this is the part I regret now) I added a horizontal line to represent a table surface and a little grey ink around and below the base to represent a table for the globe to stand on.

It looked fine at the time - I didn't realise then that once the card was finished, it would just look rather grubby, as if I'd been trying to erase a too-heavy pencil mark with a cheap rubber!
I used strips of very sparkly glitter paper for the folding. The instructions only give a border for the globe, suggesting the centre should be filled with a photo, but I filled the centre with pearlised paper and then added a die cut Christmas tree. I think next time I use one of these blanks I will try continuing the iris folding right to the centre, although I'm worried it might make the card too bulky.

The gold borders and greeting are there to try to distract you from that grey ink! 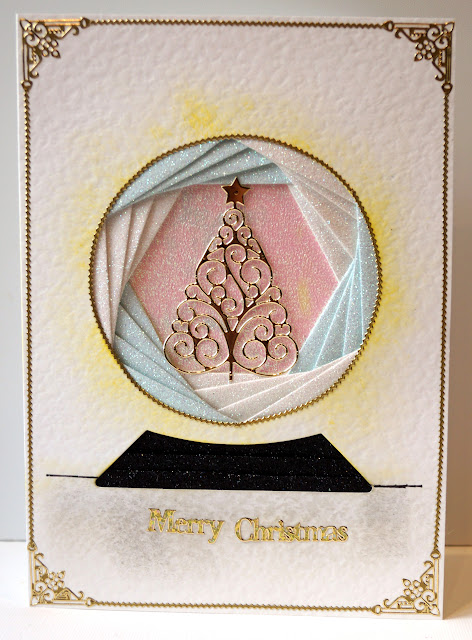 Such a pretty card and loving the folding. Loving all the inking, finishes is off beautifully. Hope your back gets better soon and that you will be able to travel ? Thank you for all your kind words on my blog and if you manage to get away have a fabulous time x

I've got some Iris folding waiting to be done - ahem - one day. I do like it, it's so effective as you shown with this fab card.
Lynn x

Well I think you've made a very pretty card!
I have never tried Iris Folding . . .but it sounds complicated and I don't think my brain could cope with it! It's very effective though.

That is really clever. I haven't done iris folding for ages, and I have never seen it used quite like this. Well done on a lovely card. Kate x

I think your card is very pretty Jane. I love iris folding, it's what first got me hooked on cardmaking. I wouldn't have noticed the grey if you'd not mentioned it. I hope your back improves and you are able to enjoy your holiday. Barbxx

Not something I have ever tried but this looks fabulous, love the sparkle and well done for giving it another go, I would have just thrown it all in bin dejected.

I love the way your iris folding just forms a frame for the globe, and your sparkly papers are so pretty. A lovely card.
Jean x

Well , Jane , if you had not mentioned the grey and your not being happy with it , I would have remarked on how clever you were creating a base for the globe making it look like it was on something .Love the tree and the folding . Thanks for sharing with us at Christmas Card Challenges

Wow, Jane, this is a stunning card with a very clever design. The Iris folding is so neat, you make them so well.

This is gorgeous, I love iris folding but it's been a while. I love the tree and the globe design. Thanks for joining us at Clear it out for the Christmas/Glitter challenge.

Hope your back is feeling better now and that you have a wonderful holiday.

Your card is so pretty.I do not think the grey looks grubby at all. I totally got that it was to suggest a table base.

Thanks for taking part in the November Rudolph Days. Good luck in the prize draw.

This is lovely! It's so delicate - not bulky at all! I hope your back feels better and if you need help while you are gone, let me know - you know where to find me <3 xx Christi

What a lovely, festive card! I love your expert looking iris folding.
Thanks for sharing with us at Christmas Card Challenge.
Hugs
Carol x

Had fun reading your Iris class adventure, as I did much the same. Did the class, and that was about it! I love the combination you've done on this pretty card, with the Iris folds as a 'mat' for the lovely sparkle of this delicate tree. The slight gold trim and shading around the aperture really enhances the inner design, and this is so pretty. We did our class with c/stock (seemed to bulky to me) and the one other time I tried it, I used just paperweight, and liked that better. But then my attention wandered! TFS & Merry Christmas. Enjoy your vacation.