As you've probably gathered, I can't resist a nice covermounted gift on a craft magazine! I realise that they aren't REALLY free, because if the mags didn't always have gifts, their regular price would be lower, but it's often cheaper to buy the magazine and gift than it would be to buy the gift alone, and sometimes they are exclusive designs that aren't available to buy. And of course you have the magazine for ideas and inspiration (not to mention temptation) as well.

I don't subscribe to any magazines because I only buy an issue when the gift is something I know I will use - this way, I tend to buy a different magazine every month so I see a variety of ideas. I've made this card using two covermounts and very little else - the embossing folder came with Quick Cards Made Easy a couple of months ago and I've already lost count of the number of times I've used it, while the die is the first outing of the gift with the latest issue of Die Cutting Essentials. 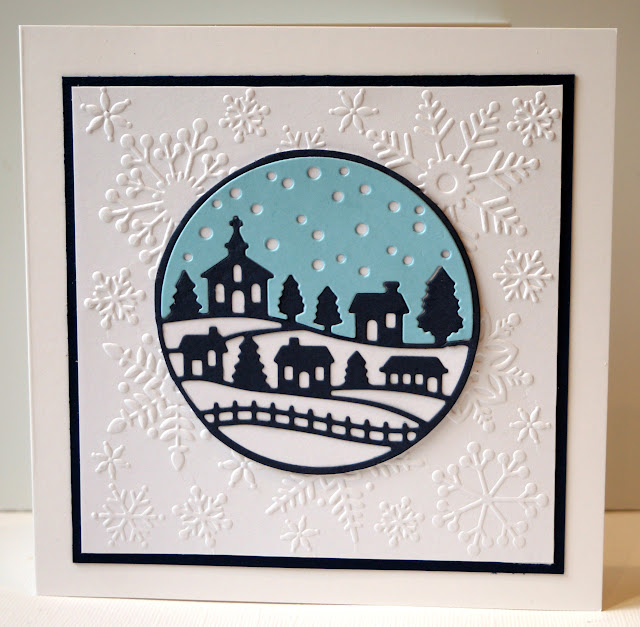 I used the Grand Calibur for the die cutting and embossing. However I know from previous use that this embossing folder gives a really deep and crisp (like Good King Wenceslas's snow) finish, and I wanted it to be less pronounced so that the die cut would be very obviously the main focal point. So instead of the usual C plate/folder/Grand Raspberry sandwich, I tried A plate/folder/Grand Raspberry. I thought it might need a shim to emboss at all, but no, it gave me exactly the softer, gentler finish I was looking for with a single pass. A useful tip to remember if you have one of those folders that is so sharply indented it can break the fibres of the material you are embossing!

OK, I've got lots of challenges to share this with, funny how so many are asking us for Christmas cards now, isn't it? Plus as I won't be around for a couple of weeks I'm trying to join in as many of my regular ones as I can this week, then they won't think I've deserted them! 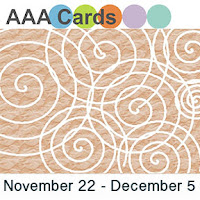 Shopping Our Stash - no stamping
Posted by Jane Willis at 15:54

This is lovely Jane. What a beautiful die that is. I must look out for that magazine. I love your colours too. Barbxx

A beautiful crisp and festive scene Jane and great to see you playing along at AAA Cards and Uniko.
Sarah x

Oooh so pretty! I love this scene. Thank you for joining us at Merry Monday!

Awesome card! Love the embossing and all the die cutting! The black is striking too. I think I have that same embossing folder.

Beautiful card, this is such a wonderful winter scene. Thank you for joining us for Merry Monday.

So much texture going on with your lovely card, yet it still manages to be flat enough to mail. Nicely done!

Great magazine shopping choices! And a great little card! Thanks for playing at AAA Cards and Uniko.

What a wonderful card. Fabulous die, I've not spotted that one. I must have that embossing folder if it came with The the Quick Cards magazine. I'll have to check through my embossing folders. xx

Totally stunning Jane - I have that EF too, unused as yet. And the die is amazing - you made a fantastic card here!

I love this - especially the little houses. But I do NOT need it! Haven't used the last things I succumbed to through your blog yet.
Lynn x

Love this card the little village is fab Debbs xx

Gorgeous card Jane, a beautiful winter scene! Thanks for playing along with the SHOPPING OUR STASH crew for our "No Stamping" challenge this week!!

Beautiful card Jane. I haven't used my die yet - its joined the ever growing nbus pile! Must try and get together again soon.

Beautiful!! Love everything about your card!

Your card is absolutely amazing! Striking black and white scene with that pop of blue. Gorgeous texture. I so LOVE that die!! What company makes it?

Hi Kelly, I can't post to your Google+ page so I hope you'll see my reply here - the die was the cover gift on Die Cutting Essentials magazine, so I think it was specially produced for them and not available elsewhere. I bought my copy online from http://www.moremags.com/papercrafts/die-cutting-essentials/die-cutting-essentials6

Super card! Super texture in the background with the snowflakes and I do like the die cut scene. Great card. Thanks so much for playing along with our Christmas challenge at Uniko this month!

This is a neat card with lovely layers and textures.

Very nicely crafted! Thanks so much for playing along with us at Shopping Our Stash!
Hugz,
Chana, DT

A fabulous card - I've just bought this magazine as I fell in love with the die too!
Kath x

A fabulous card - I've just bought this magazine as I fell in love with the die too!
Kath x

Love the texture you created here. Thank you for joining us at Merry Monday!

I love the die-cuts in black. They stand out so well against the other colors. Thanks for playing Merry Monday!

Super use of the free die Jane - a beautiful card

OMG the composition on this is perfect - so CAS and crisp. The die is also stunning- who knew you could get such fab stuff with magazines!! Thanks for sharing with us at AAA Cards - Jenny :)

Beautifully done & not a stamp in sight, something I would truly struggle with let alone create such a beautiful design as this. Thanks so much for sharing & joining in on the Uniko Challenge. Hugs Bev x

Fabulous card. I absolutely love that die. Thanks for joining in the Shopping our Stash no stamping challenge this week.

Wow, this is a wonderful winter scene =) I really love it!