I've made this card using stamps that were a freebie with Making Cards magazine a year or two ago. 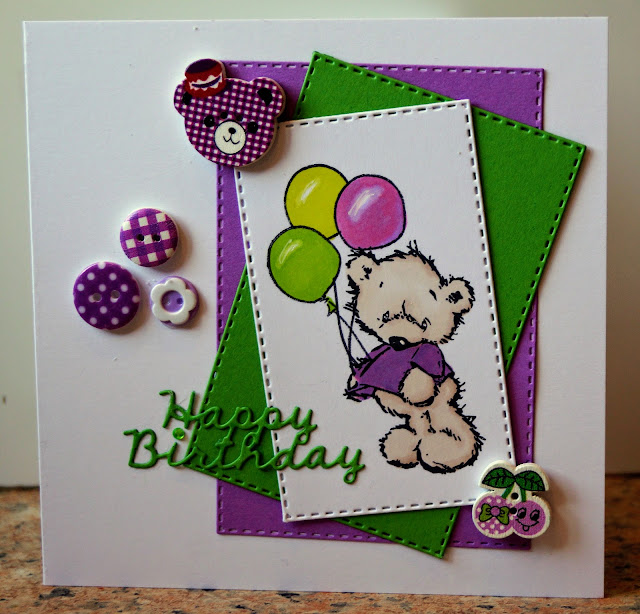 After stamping the bear, I masked him to stamp the balloons (because I didn't want the poor little bear to get his snout tangled up in the strings) then coloured him in with Promarkers, using a blender to remove a little of the ink to form a highlight on the balloons. Then I cut him and some matching layers out with Gummiapan nesting rectangle dies and added a die cut sentiment, using a First Edition Happy Birthday die. The die doesn't include a dot for the "i". Now I know they are fiddly but an undotted i looks all wrong, so i found a tiny green gem to do the job. I finished with an assortment of buttons including a couple of really sweet shaped ones - but  is it just me, or is that bear button wearing a hamburger on his head? 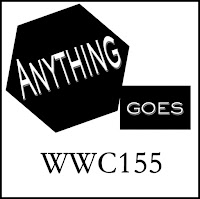 What a sweet card, Jane ! Love the purple and green together and the buttons are a nice accent.

Thanks for joining our "Birthday Balloon" Challenge @ Little Red Wagon this week and i hope to see you back again soon !

Love the colours on this card, Jane and the little bear is adorable. Super card. xx

Oh Jane, I love your card. That said, I have to add that I also love reading all about its creation. Your commentary put a smile on my face. Hamburger on its head! Until I read that the funny little thing on that odd bear button's head was just an equally odd hat but now all I see is hamburger. Back to the card. I love that adorable little bear image! How sweet and how beautifully coloured. You've made him come to life (and you spared him being tangled in those balloon strings--how kind!) Love the colours throughout and the way you've used those nesting rectangle dies. Having each slightly larger than the last adds another layer of delightful detail. Great work! Thanks so much for joining our Watercooler Wednesday Challenge this week.

This is so sweet love how you added the highlights to the balloons and all the buttons. Maybe the bear head works at a fast food outlet?!

Love the colours and layout you've used for this card Jane. The bear image is so sweet and I love that you masked him to avoid the string look across his face. Yes, I do indeed think that's a hamburger on that little bear's head ... too cute. Love those buttons too! Thanks so much Jane for joining our "Anything Goes Watercooler Wednesday Challenge this week.

This is such a cute card! Love the colors and great coloring of the image. Thanks so much for joining our Button Up challenge at UYS this week! -Lori DT

Those colours make for a really festive card! Love the shy-looking bear - so sweet. Thanks for joining us at Watercooler Wednesday.

what a cute little teddy
and love all the button in purple
sweet and cute card Jane
hope you are doing well my friend
many thanks to joining with us at ATSM
I am sorry for late commenting :)
hugs
Monika (ATSM DT)

Such an adorable card! Thanks for sharing it with us at Addicted to Stamps and More and we hope to see your beautiful creations again soon! Hugs Gwendolyn