G is for Galaxy at Sisterhood of the Snarky Stampers

Edna's gone interstellar! Well, for the next two weeks, at least, because she's given us the theme Galaxy for our challenge #103 at the Sisterhood of Snarky Stampers. 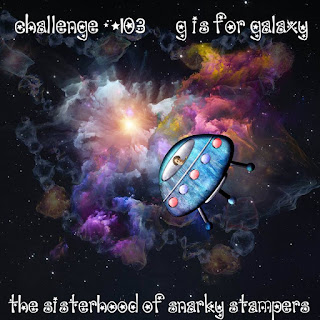 So, we'd like to see something connected with the Galaxy - a galaxy/night sky background, space travel, planets.... (I'm thinking of a Galaxy chocolate bar right now, I wonder how that would go down with Edna?)
Here's my card and if you don't get the sentiment I'm not sure how we've managed to become friends! 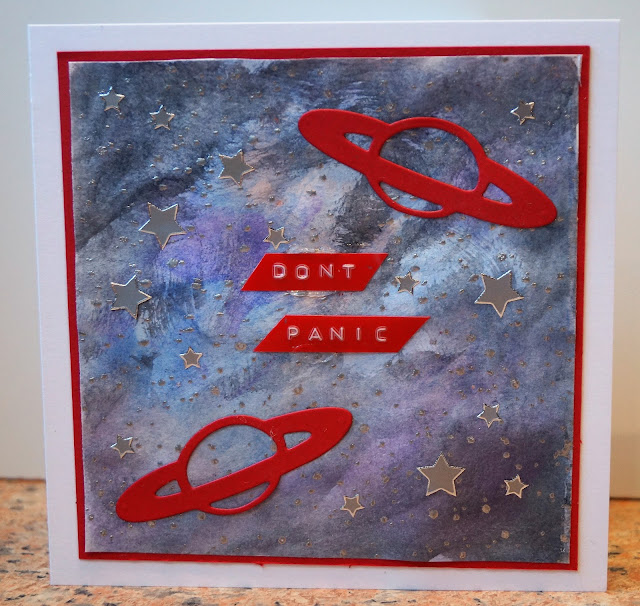 The background is my first attempt at a galaxy background. I searched You Tube and found several videos about it, but I didn't have the right stuff for any of them so I sort of made it up as I went along.

I used watercolour paper and a very wet light blue wash, and while that was still wet went over it with random splodges of darker blue and purple watercolours with a dash of orange. When it was dry I added the black, this time using a wide, almost-dry brush in roughly diagonal swooshes to give a patchy cloud effect. I let the whole thing dry then painted over it all with Jo Sonja's Opal Dust which has an unfortunate habit of never showing up on photos but leaves tiny reflective pearlescent specks all over the paper.

Once everything was dry and had spent the night under a pile of heavy books to flatten it, I stamped the random dots (an old Anita's stamp) all over in silver and heat embossed with silver powder. 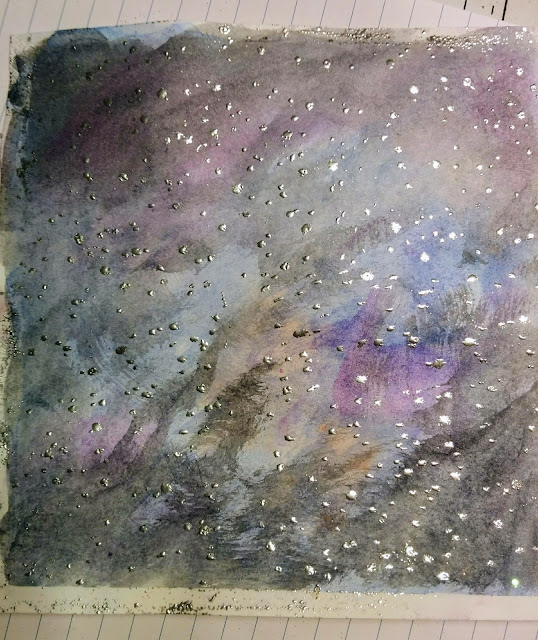 It was trimmed and matted and a couple of die cut planets added then I used a Dymo Labelmaker to add the all-important sentiment. Apologies for the lack of apostrophe but there isn't one on my labelmaker.

Now I'm off to sit on my towel and contemplate the meaning of life while slurping on a Pan-Galactic Gargle Blaster.

I am sharing this with Country View Crafts - anything but cute
Posted by Jane Willis at 11:30

Nice card, Jane! The galaxy background with the stars is pretty!
Thank you for playing along with our Challenge this month at Country View Crafts.
Evelyn xx

Well, I guess we can be friends, because I had to stop everything when I saw this card! When the current USA President was elected, my husband and I were both upset, and we randomly received a free small towel from our card company that day. My husband has been carrying it ever since LOL. I actually cut out "Don't Panic" from vinyl and had it on my phone case for a while. And we live on "42"nd street! Great card, your background is wonderful. Makes me want to get inky! Best, CG

I need to mix up my Doctor Who cards with some HGTTG and Star Trek ones, two other favourites! Thank you for the timely reminder, and the awesome card.

Awesome background, you did a fabulous job of the galaxy theme. Great card!!!

Great galaxy background. It makes a fantastic card. Love the sentiment too x

What a fun card Jane, I love your galaxy and great choice of sentiment. Thanks so much for joining in with our chalenge at Country View Crafts, and have a fun week, Sue xx

You are so funny! This is a fab card and yes, I get your sentiment, dear Sistah!

I adore your snarky cards! xoxo