When I was a little girl, my grandma always had a bowl of these delicious pickled onions on the table, at every mealtime. Mum occasionally made  them too, but usually only if we were having chips or a salad. We all loved them so much we used to sneak into the kitchen and steal them from the bowl - every few minutes the metal plate she covered the bowl with could be heard rattling and by the time the meal was ready, there were hardly any left! 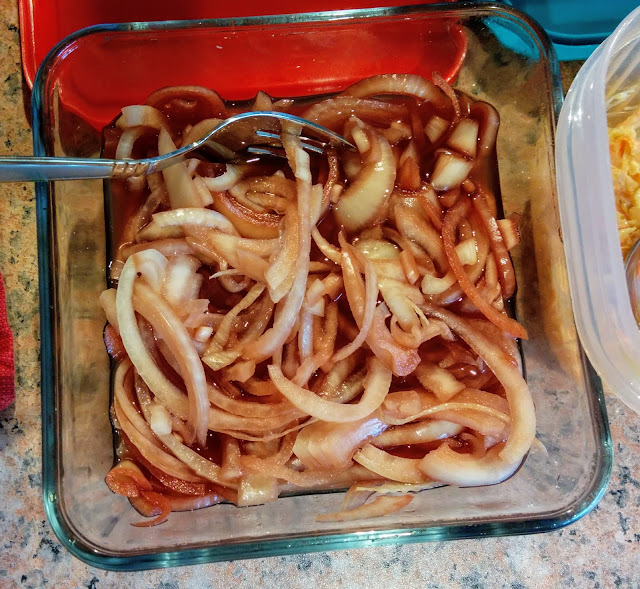 They were very popular in fish and chip shops and cafés around the Warrington area where I lived as a child, most places had a large bowl of them on the counter for customers to help themselves from, and although I never went in pubs then, they probably had them there too. Only a few years ago I went in a pub that still had them, although they were probably flouting all kinds of laws made up by the Department of Over-Protecting Us From Ourselves.
After all, they were in a large, uncovered bowl and customers could dip mucky utensils and even fingers in - but I'm sure the vinegar would do a lot to help prevent the spread of germs!

Anyway, since you probably won't find 'em in't pub or't chippy any more, here's how to make them.

For 1 large onion you will need 250ml of vinegar, 1 teaspoon of salt and 1 heaped tablespoon of sugar (I use a third of the quantity of Truvia). Whisk the salt and sugar into the vinegar until dissolved. Peel and halve the onion and slice very thinly, and place in a non metallic dish with a lid. Pour over the vinegar mixture and leave to stand for 3-4 hours, stirring occasionally.

This keeps well for several days at room temperature - given chance! When the onion is all used up you can slice another into the vinegar - I usually do this 2-3 times, after which the vinegar takes on a cloudy appearance which is unappetising.

Traditionally these are made with malt vinegar but I've made them with all kinds of vinegar, whatever seems to best match what we are eating. I'd stick to malt vinegar if they are going to be eaten with fish and chips though! My current batch, in the photo, was made with red wine vinegar - HOME MADE red wine vinegar, made using the vinegar maker my daughter gave me for my birthday last year. 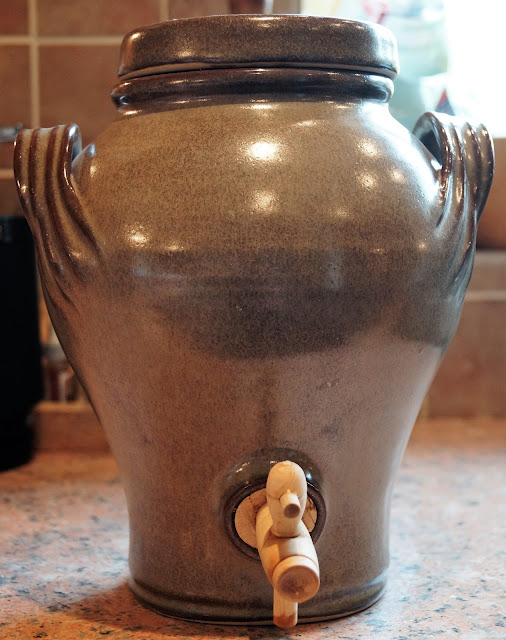 She said I'd be able to make vinegar using left over wine - honestly, she's known me for thirty odd years, she's my daughter after all, and yet she somehow thinks I might ever have left over wine! So I have to buy wine for it - I treat it to a bottle now and then when there's a good special offer. The vinegar may not be cheap - but oh my word it's wonderful!
Posted by Jane Willis at 13:00

Ooh that sounds yummy. Sadly hubby doesn't like anything vinegary, ooh guess that means more for me! Pfft st your daughter even thinking that there was such a thing as left over wine, let alone that you'd have some! I've never heard of a vinegar making - you know I'm off googling it now... x