The current challenge at The Male Room is Inspired by Television  and at The Alphabet Challenge it is Wheels, so as my knowledge of TV is pretty sketchy, and of "blokey" programmes, sketchier still, so I thought I would combine the two and make a car themed card, to represent the programme Top Gear.

However, there was a change of plan..... 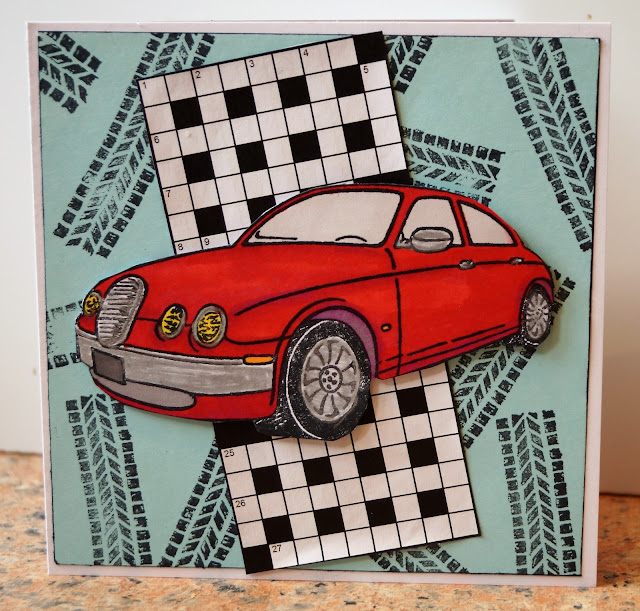 I made a background by stamping the tyre marks randomly over blue paper, then stamped the car and coloured and fussy-cut it (both stamps are from a very old Linda Luckin set, no longer available) and then I thought "hang on, that car looks just like Inspector Morse's car"  - so what else could I incorporate to make it represent the programme "Morse"?

Well, Morse was a massive crossword fan. There's a lovely crossword stamp on my wishlist but I've not got around to buying it yet, so I rummaged through the newspaper basket and - YES - there was a crossword magazine with an in-solved crossword that was exactly the right size for this card.

So here we have it - a Morse card which I am sharing with the above challenges.
Posted by Jane Willis at 14:44

Great card for someone who likes cars.

Super cute!!! Thank you for joining us at Alphabet, good luck!!! Amy DT

Fantastic card, like ve how you added an actual crossword x

Or even, love how you added an actual crossword!

I LOVE how you got everything together for this card, GREAT ideas and execution of the card. Glad you are sharing your lovely card at The Male Room - Faith DT

I love Top Gear!! I think your card is just super! Really nice sportscar too. Thanks so much for playing along with our Inspired by Television challenge at The Male Room. Deborah, DT.

This caught my eye as I am a big fan of Morse, very well thought out card, love it. Thank you for sharing it with us at TMR.