The advent of the "Instant Pot" has meant that pressure cooking has become cool again. Well, not COOL - it's very, very hot - but you know what I mean.

I had one many years ago and I don't think I ever used it - it terrified me so much. But a few months ago I got a new one - not an instant pot, not an electronic one, but a good solid Kuhn Rikon one that would probably withstand a volcanic eruption, so an occasional overheated chicken isn't going to destroy it. So now I'm learning and experimenting.

For this recipe, I used it to dramatically shorten the cooking time of a ham hock. 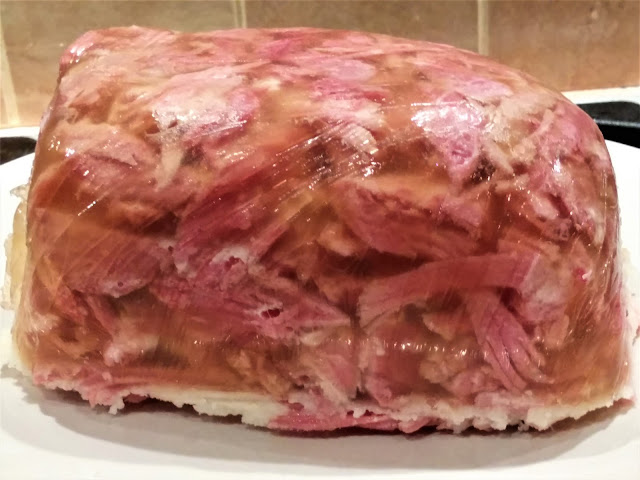 To make this you will need

One ham hock - mine weighed 1.6 kg
flavourings for the liquid - 1 onion, 2 carrots, 2 bayleaves, 5 cloves and a teaspoon of black peppercorns.

Place all the ingredients in the pressure cooker, add 500 ml water and then cook, according to your pressure cooker's instructions, at high pressure for 1 hour. Reduce pressure using normal pressure reduction. Allow the ham to cool in the liquid.

Now remove the ham from the liquid and strain the liquid into a clean pan.

Line a small terrine mould or small loaf tin with two layers of cling film. If you have neither, you could use a pudding basin.

Remove the skin, bone, fat and gristle from the ham and shred or cut into small pieces. I used a mixture of shreds and slightly chunkier pieces to add interest.

Now put the pan of liquid over a high heat and boil hard to reduce it to about one third of the original volume. Set aside to cool for about 30 minutes - in the meantime pack the ham into the prepared dish, pressing it down firmly. Pour over the cooled liquid, slowly, while occasionally shaking the dish to make sure the liquid fills the gaps.

Cover with more cling film and refrigerate over night. The reduced liquid will set to a highly savoury jelly. 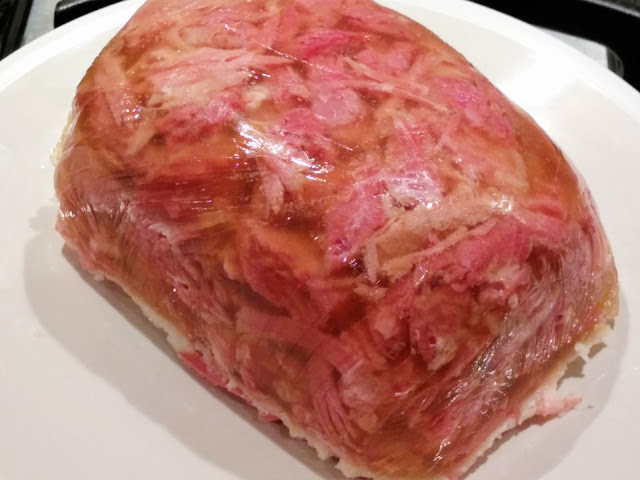 Cut into chunks or slices and serve - I served it with baked potatoes, salads and some of my Northern-style quick pickled onions. Oh, I don't think  I've ever blogged the recipe for those - must do that soon! 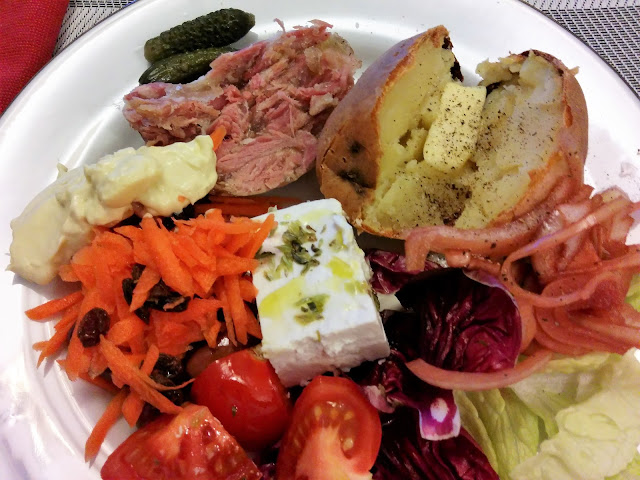 That all look very tasty Jane. I have and have used a pressure cooker for most of my life,as my mother always used one too. But I have never made anything this good looking.

This sounds yummy,. I have a pressure cooker somewhere bit don't think I've used it for about 20 years. Wonder if it would need new seals...

Have cooked with pressure cookers since 1981 but must try this receipe looks good.