This is one of my fridge-dive dishes - the sort of thing I'm sure many of us have thrown together at the end of the week, or when the pennies are running low, but I wanted to share it with you because of one rather unusual ingredient that I tried simply because it was there and needed using up - and it worked so well I'll probably use it from choice in the future....... tomato ketchup! Mine was the dregs of a jar of home made, but any bought one would do.

This hardly really needs writing down, but if you've just looked in the fridge and thought "There's nothing to eat" it could make you change your mind! 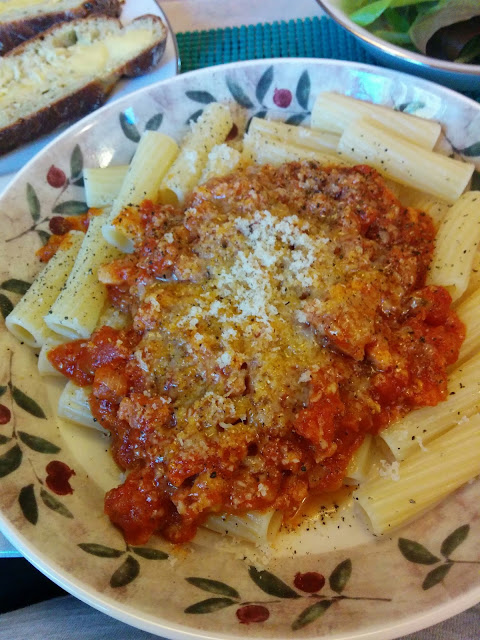 Ingredients  well, whatever you have really, but here's what I used to serve two:
I small onion, chopped
half a dozen rashers of streaky bacon, chopped
1 clove of garlic, crushed
6 mushrooms, wiped and sliced
1 tin of chopped tomatoes
3 tbs of tomato ketchup
pepper (if your bacon is salty you probably won't need salt)
the end of a piece of Parmesan, finely grated
whatever pasta you have to hand - I used about a third of a bag because that's what was there.
Place the bacon and onions in a cold pan and heat slowly for a few minutes until the fat runs out of the bacon (if your bacon is very lean you may need a splash of oil)  then increase the heat and fry until the onions are soft and the bacon starts to turn brown and crispy. Add the garlic and mushrooms and cook for a couple of minutes longer, then stir in the tomatoes and ketchup and simmer for 15-20 minutes while you cook the pasta. Season and top with the Parmesan.
Apart from the onion and tinned tomatoes (and they were from a BOGOF offer) everything else was last bits and odds and ends that were in danger of being thrown away, so I really felt as if I'd produced a free meal. I could have added carrots, peas, sweetcorn, peppers, chillies, herbs or pesto to the sauce as well as or instead of the mushrooms, or left the bacon out and made it vegetarian. It's just a basic go-to storecupboard meal and if, like me, you've been so busy cooking more fashionable things that it's dropped from your repertoire, it's time it came back onto the menu!
I'm sharing this with Pasta Please at Slice Off Me and Tinned Tomatoes

Another fabulous comforting meal Jane:-) Thank you for entering #CreditCrunchMunch;-)

Bacon you say? I'm going to have to try this.

I love empty fridge recipes, and I think it is really important to write them down as so many people cannot make this type of dish! Thanks for linking up to #creditcrunchmunch